In my book We Are All Innocent by Reason of Insanity I describe how we tell a Story that defines our lives. What I mean by insanity is ‘confusing our mind-generated reality with actual reality.’ Our personal narratives are an example of that confusion. We begin to tell stories about ourselves as small children. Our families and teachers tell us stories about ourselves. We spin these stories into a personal narrative. By the time we reach adulthood we have forgotten that this narrative is just a story and believe it is the truth of who we are.

One of the suggestions I make in We Are All Innocent is to ‘question the Story.’

Last fall I was camping with a friend and in the evening we had a long, lovely conversation by lamplight. She told me of a book she had read that started with a description of a man’s life. He was an engineer and totally uninterested in matters of the heart. He had no close friends, no wife or children. Then one day at 40 an illness struck and he found himself in the hospital, close to death. He spent days in his hospital bed “rewriting the story of his life.”

I stopped my friend there—“What an incredible image,” I said. “Rewriting the story of your life. What a powerful concept.”

My friend went on with the story: the man survived and completely changed his priorities. I don’t remember much else about it, because I was filled with wonder at the possibilities inherent in ‘rewriting the story.’

This thought has stayed with me, and I have looked at how I have rewritten my personal narrative over the course of my life.

I grew up in a family I compare to the “Leave it to Beaver” TV show: dad worked, mom took care of the kids, no problems. Part of my childhood Story was “I am part of a completely normal American family.” Then one day in 1974 this storyline was shattered when my father announced he was leaving. At that time, in the upper-middle class town we lived in, divorce was still rare. My narrative told me that being the child of divorced parents meant I was defective in some way.

This became part of my Story. I was flawed. I was defective. I was not good enough. My best friends for the rest of my time in high school were also children of divorce. My husband was a child of divorce. I became insecure about my abilities and talents and didn’t pursue the professional career I had always expected was my future.

A second rewriting of my Story happened when I went to the Soviet Union in 1979. I had been very patriotic, proud that I was born in the U.S.A. I was also idealistic and dreamed of utopias. This is what made me curious about the Soviet Union—what made the dream of perfect equality go so horribly wrong? I wanted to see for myself.

I had been raised with the American storyline of the Cold War: the USSR was a mortal threat to the free world. What I found on my visit was a poor, third-world country that could barely feed its citizens. I was only 21 but could see that there was only so long this country could hold things together. I spoke Russian, and everywhere I went in the six weeks I was in the country the most common question people asked me was “Why does your country want to have war with us? We don’t want to have war with you.” And my astounded answer was always, “My country says you want to have war with us.”

I finished that summer with a whole new Story about the world and my country. Clearly I had been lied to. No longer did I see my country as the ‘best country on Earth’ that ‘always told the truth and acted for the good.’

A year later I met Arthur. He told me a moving story about an experience he had had in an est seminar, where he saw his parents as people who had done the best they could in their lives. No longer were they just ‘my parents,’ they were real human beings with worries and problems of their own. This was a revelation to me at age 22. It enabled me to change the way I saw my parents, and rewrite my Story of who they are—no longer were they just mom and dad who did good and bad things to me—they were complex human beings with their own narrative trajectory. It took a long time but I was finally capable of rewriting the story of my dad from one of anger for divorcing my mom to one of compassion for his struggles in life. Over time this rewriting went so far I quit calling them ‘mom’ and ‘dad’ and instead use their first names, as if they are friends. Because they are my friends.

Many years have passed. Old stories have been revised. Twenty years ago I worked hard to rewrite my ‘flawed, insecure’ Story line.

New stories have been told. I found a soul mate in Arthur and we lived an adventurous life together. My story became a joint story. I was Katie-and-Arthur, K&A. I was we.

Then Arthur died a little over a year ago. How do I rewrite we to I?

In the midst of the intense sorrow I felt after Arthur’s death, I reached perhaps (I hope) the bottom of despair a couple of months ago. I felt like a character in a tragedy. But one day I roused myself and proclaimed, “I refuse to live my life as if it is a tragedy because it isn’t!”

There was a period of time some years ago, when I was first beginning to realize the power of story-telling, when I would say ‘Tell me something new’ to Arthur whenever he repeated a time-worn complaint or storyline.

One day last month I was weeping next to the urn containing Arthur’s ashes, crying out for the thousandth time “I miss you,” when Tell me something new came into my mind. It was as if Arthur whispered it to me. I realized I can miss Arthur intensely and still have something new in my life. My Story can include grief and joy simultaneously.

This week I read an excerpt from a new book called Remapping Your Mind, about how we can find healing in both body and mind by learning to retell our stories:

We all carry a “master identity narrative,” our version of the story we tell to explain ourselves. We tell short versions of this story to encourage others to see us as we wish to be seen. This master narrative or identity narrative is a synthesis of many stories we have accepted and repeated about ourselves. Sometimes we are only vaguely aware of the source of some of these stories. We can remember the point and forget where we got the story.

By the time we are young adults, we no longer are aware of the depth and complexity of the woven field of stories we inhabit, and we think our stories are simply “the truth.” This sense that they carry some kind of absolute weight leads us to think that they also are a condition for “the way we really feel.” This can lead to suffering that we may not understand. Illnesses unfold in us in the context of these stories.


One of my favorite items on the little altar I have built around Arthur’s urn is an acorn that I found out in the woods last fall. It was near a tree where I always feel a strong connection with Arthur. This little acorn represents for me the new Story I am writing of the next chapter of my life. 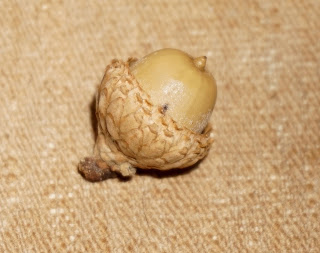