I Helped Her Cry

Just recently I read a lovely story in a book called “Healing After Loss,” (daily meditations for people who are grieving), which made me think of the film ‘Inside Out.’ It perfectly describes what Sadness did in the film. (see my blog post on the film.)

A little girl got home from visiting her friend later than her mother had expected. When her mother asked the reason for the delay, the child said, ‘I was helping Jane. Her doll broke.”

The mother asked, “Did you help her fix it?”

Sometimes that’s what we need more than anything else: someone to sit with us and feel our sorrow. That is my experience with grief: no one can end my sorrow, no one can ‘fix’ it, but when others share it the pain lessens just a little. I don’t feel so alone. If/when you know someone who is grieving, don't be afraid of their tears. Cry with them.
Posted by Unknown at 8:30 AM 1 comment:

Making Friends with my Emotions 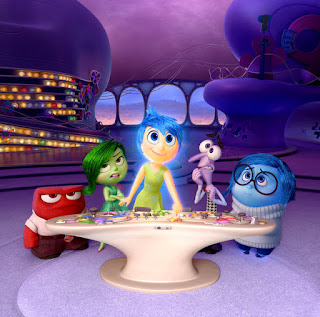 ‘Inside Out’ is a remarkable film that animates a model of the human mind in a very entertaining fashion.

The main human character is an 11-year-old girl named Riley, but the majority of the action in the film takes place in her mind. The conscious mind is portrayed as a control room staffed by five emotions: Joy, Sadness, Anger, Fear, and Disgust. The emotions interpret and react to events in Riley’s life, and the emotional response puts a stamp on experiences as they are saved to long-term memory. (The filmmaker acknowledges that he had to simplify the emotional composition of the human mind to keep the film from being overwhelmed with characters. I think he did a good job at picking the most important ones.)

In the beginning of the film, Joy rules the control room. The other emotions have their place, but most of Riley’s memories have Joy’s emotional imprint.

A catastrophe knocks Joy and Sadness out of the control room and they are forced to find their way back. They traverse the vast maze of Long-Term Memory; the cavernous, scary Unconscious; the funny Dream Factory and Imagination Playhouse; and the abyss of the Memory Dump.

If you haven’t seen the film, I’d encourage you to stop now and read this after you’ve seen it.

What the film illustrates beautifully is that all of our emotions have their place. We may dream of a life with no sadness, no anger, no fear. Many of our spiritual pursuits are about getting to a place where there is no suffering; where only joy—bliss—remains. But I have found myself increasingly wondering: is that pursuit compatible with the nature of existence? Is the pursuit of ‘no suffering’ in fact anti-life?
Read more »
Posted by Unknown at 3:09 PM No comments:

Grace is a concept I have struggled to understand. I was raised as a Christian and learned in that context that grace was something God gives to undeserving human sinners. When I rejected the religion of my youth I rejected grace too, and thought no more about it.

When I developed my HACLG (hac-ul-gee) system for my spiritual path (honesty, humility, acceptance, compassion, love, gratitude) I would say, “gratitude is as far as I’ve gotten and it wasn’t easy for me to get to gratitude!” [I used to call this GLACH; read my blog post about it.]

Then my beloved husband Arthur died, and there was an aura around his death that could only be called “grace.” I couldn’t think of another word to describe what I was witnessing. What I saw was a profound alignment with the way it was, a dropping of all resistance and opposition to the flow of the universe. And it was so beautiful. Arthur was graceful, in every sense of the word.

I saw then that grace was a second ‘g’ to add to my system. When you have gotten to the stage where you accept reality so fully that you are grateful for the way it is, you become filled with grace. You are in synch with reality; you are flowing with the stream of reality, not fighting against it.

I like this definition of grace from an online dictionary: “Seemingly effortless beauty or charm of movement, form, or proportion.” That effortlessness can only come about from the complete lack of resistance to the flow of reality.

Yesterday I listened to President Obama’s eulogy for Reverend Clementa Pinckney, who was murdered in his Charleston church. I was awed by the fact that Obama took grace as his theme.
President Obama spoke (at about 18 minutes into his speech) of how the (alleged) killer couldn’t see the grace surrounding Rev. Pinckney because he was blinded by hatred. Obama continued that he’d been contemplating grace the whole week, including the grace of the families who lost loved ones, and then he recited the first verse of the song, “Amazing Grace.” The crowd went wild with delight. Then he said, “As a nation, out of this terrible tragedy, God has visited grace upon us, for he has allowed us to see where we’ve been blind. He has given us the chance, where we’ve been lost, to find our best selves.”

He kept returning to the theme of grace, and then ended with this thought (about 34:00): “the path of grace requires an open mind, but more importantly an open heart. That’s what I felt this week, an open heart. That more than any particular policy or analysis is what’s called for right now, I think…if we can find that grace, anything is possible. If we can tap that grace, everything can change.” Then he paused and said, “Amazing Grace. Amazing Grace.” And he was clearly moved by the concept of grace…and then famously he began to sing, and the whole crowd leapt to their feet to join him.

I thought at the time the singing might have been spontaneous, but according to the New York Times it wasn’t. However, the fact that grace was the central theme was President Obama’s idea:

Mr. Obama expanded on a short riff in the draft about the idea of grace, and made it the central theme of the eulogy: the grace family members of the shooting victims embodied in the forgiveness they expressed toward the killer; the grace the city of Charleston and the state of South Carolina manifested in coming together in the wake of the massacre; the grace God bestowed in transforming a tragedy into an occasion for renewal, sorrow into hope.
…
He also inserted lines from his favorite hymn, “Amazing Grace,” as a refrain, and, on the way to Charleston aboard Marine One, he told his advisers that he might sing some of those lines “if it feels right.”

I may disagree with President Obama about the meaning of grace, which he defined in the standard Christian context, but I am grateful that my president could leave politics behind and fill this important speech with such moral power.

Grace. So now my path is: H2ACLG2. Starting to look like a chemical equation for a spiritual life!
Posted by Unknown at 12:42 PM No comments: