A Tribute to Arthur Hancock

Do not weep for me,
This is not my true country, I have lived banish’d from my true country, I now go back there,
I return to the celestial sphere where everyone goes in his turn.
—Walt Whitman, Salut au Monde!
My husband, my lover, my friend, Arthur Hancock, died in February of 2015. He would ask that we not weep for him; he lived a life filled with love, creativity, and adventure and believed that in death he just moved on to his next adventure in the celestial sphere.

I knew Arthur for almost 35 years, which was half of his life. We were soul mates. That can be a cliché for couples that live together a long time, but in our case it went far beyond the cliché. 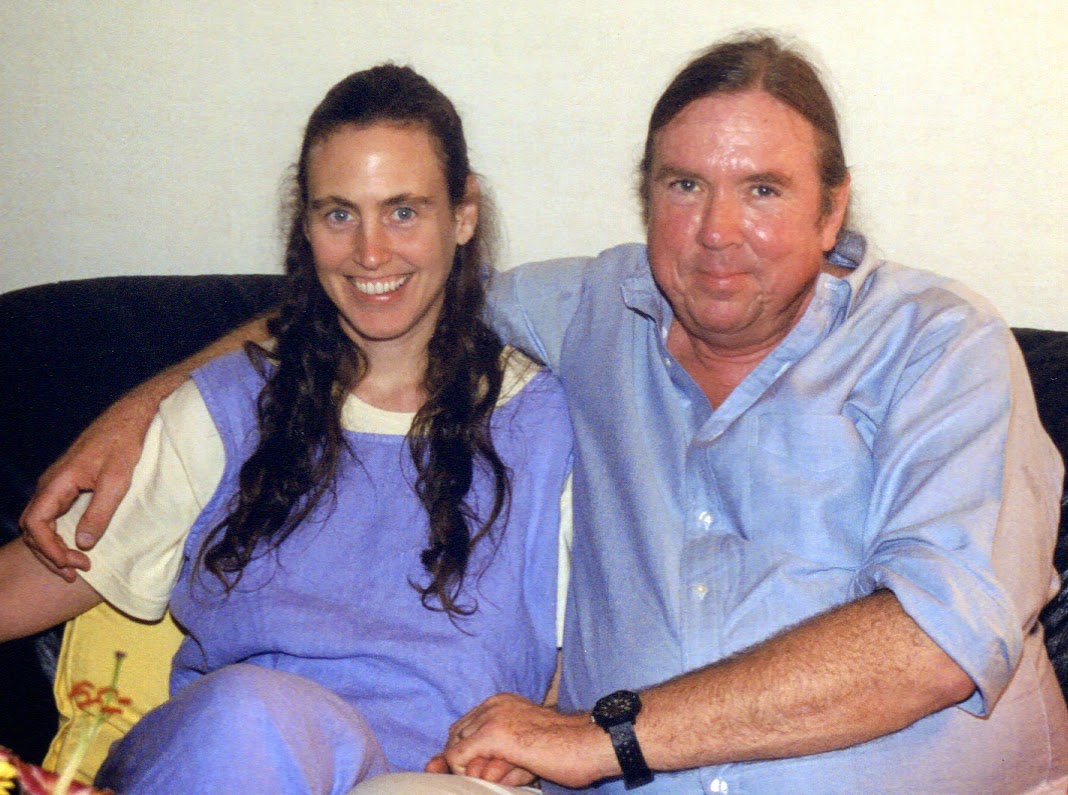 Arthur was an extraordinary person. He thought for himself and lived by his own rules. He was fiercely independent. He was brilliant.

Arthur had a great heart, honest and open. Open to all creatures, from all walks of life. Open to all ideas. Open to art, music, laughter, and love. Being open allowed Arthur to be easily moved by a song, or a poem, or a person’s story. As a result, he could see deeper into people’s hearts than most people.
Arthur was passionate about many things, chief among them love, truth, and music.

He was a natural-born musician; music was in his heart and soul. He played guitar and sang, and his greatest love was folk music. Arthur knew hundreds of songs; he had a song list with about 400 “requestable songs” on it, and when he played a club he’d pass the lists around. You could call out a song and he’d just launch into it. If you asked him to play a song he didn’t know he could always fake a verse or two. 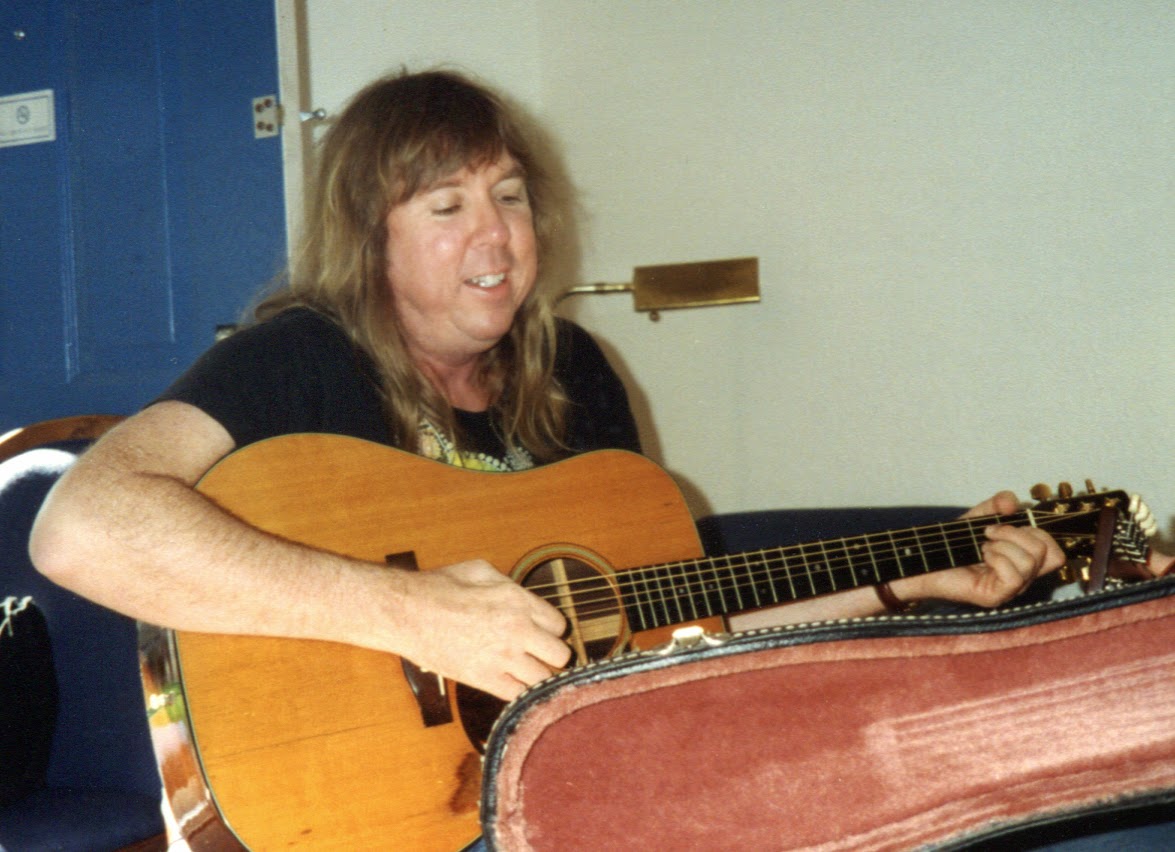 He was also an amazing entertainer. He lived to be on stage in front of an audience. He loved songs from many genres—folk, old standards, blues, jazz, rock-and-roll, country—so it was easy to find a song for everyone. 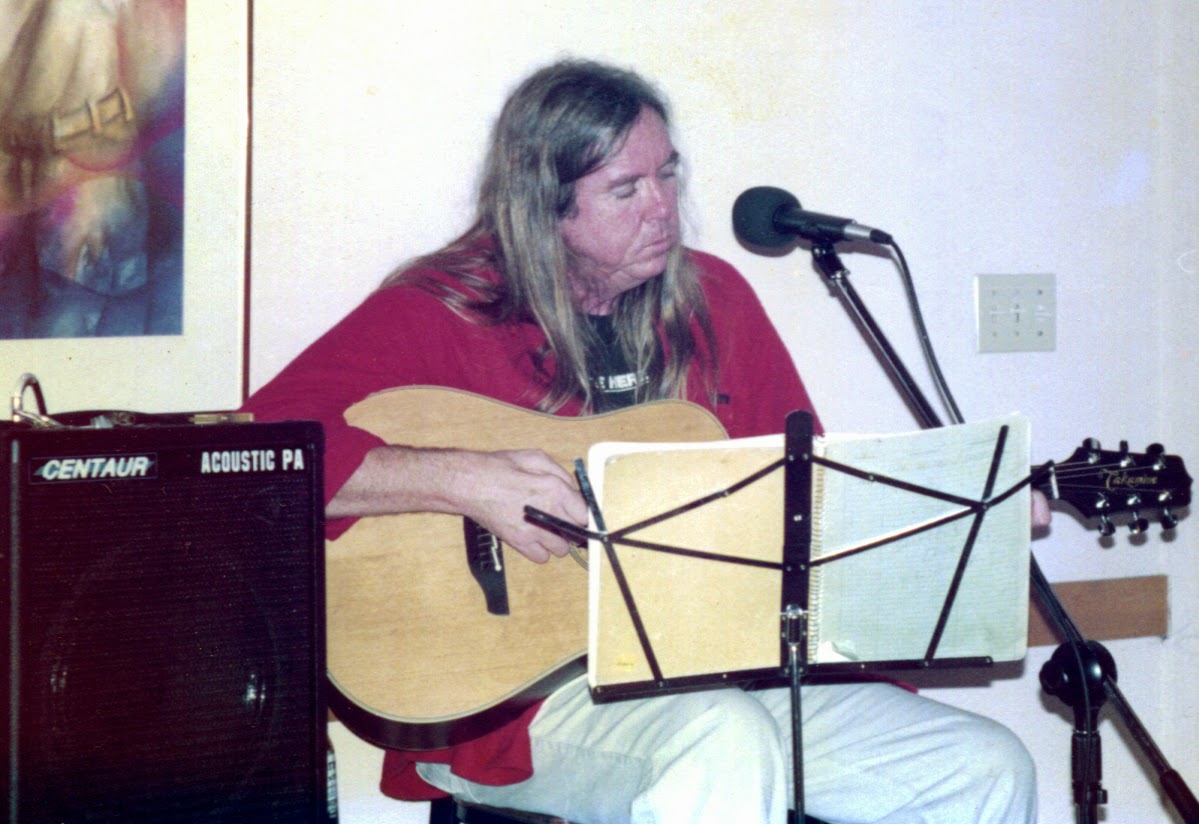 But Arthur's interest in music was not just because it pleased him to play. It also stemmed from the fact that he loved to please others. Arthur loved playing for kids, and had all sorts of silly songs and silly voices to make them even more special. When he was on stage performing, he would work tirelessly, pouring out sweat, never taking a break, if he felt he was making his audience happy.
Arthur was an incredible songwriter. He wrote over 90 songs, and John Denver recorded one, entitled 'Relatively Speaking.' His songs are mostly about his passions: truth and universal love. He also wrote songs about relationships, but many of these expand out to universal love. I feel you could build a spiritual practice around Arthur's songs; his songs are both uplifting and inspiring; they are mind-expanding and heart-opening. You can hear all of his songs on his YouTube channels, Songs in the Key of Consciousness and We Are All Innocent by Reason of Insanity (the musical).

Arthur could spontaneously create a song to fit any situation and mood. In the first half of our relationship we had a cat, Fluffles, who lived for sixteen years. We had eight or ten songs about her we loved to sing. Arthur and his daughter Clea had many they’d written together.

Arthur had a great sense of humor. He loved to laugh. He loved silly movies like Airplane (our first date), Where’s Poppa, and Polyester, and TV shows like MST3K, Black Adder, and Fawlty Towers. He loved being silly. Even as an adult, even in his 60s, he would be silly and playful. 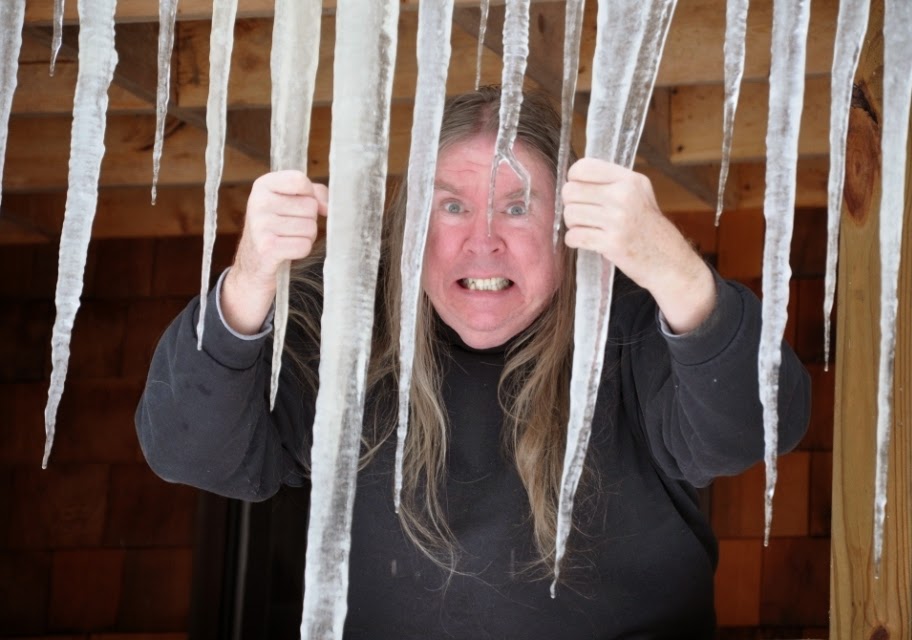 Whenever he and his daughter were together in a store they’d always misbehave in the funniest ways. 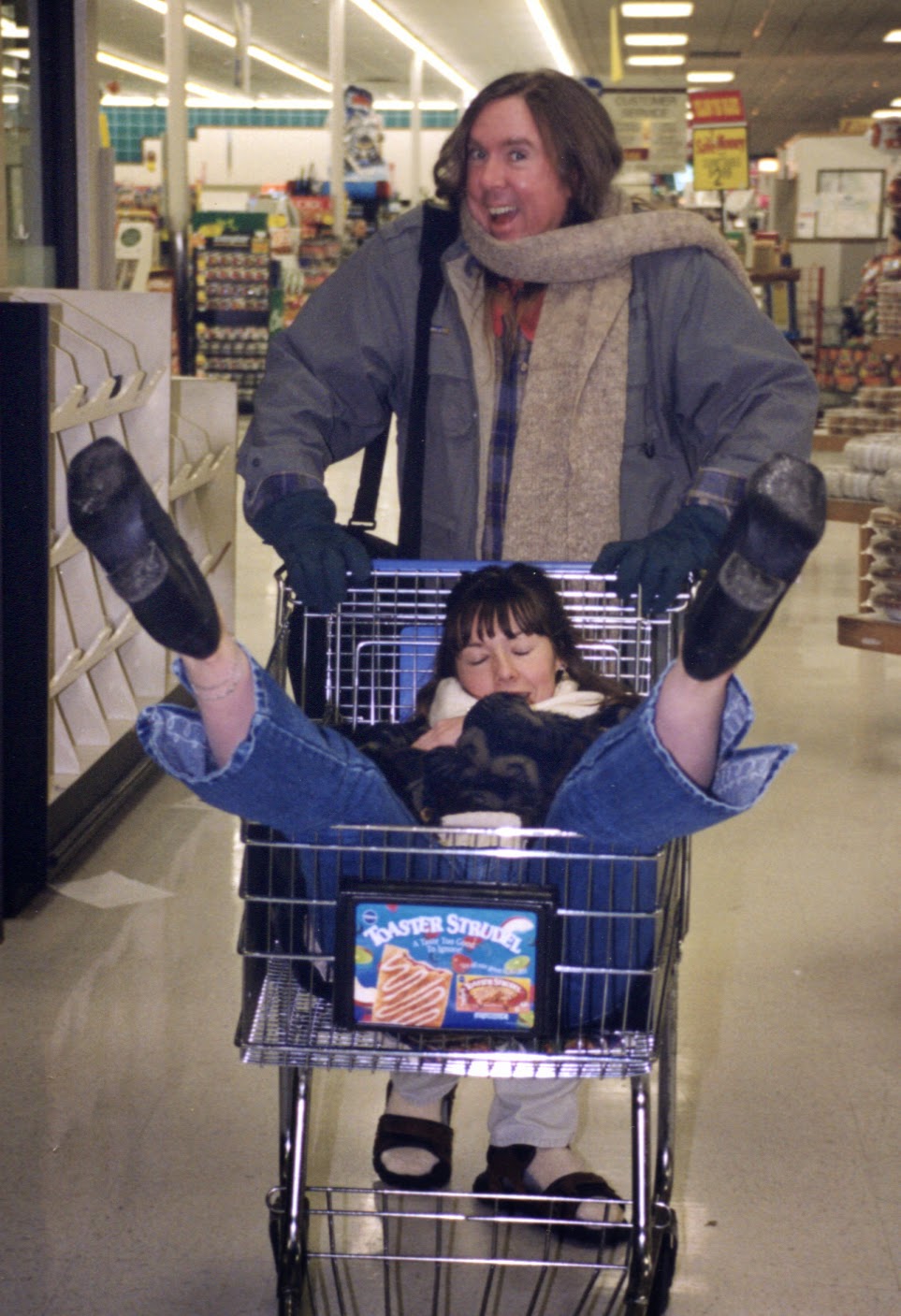 Arthur brought this silliness to Blackberry Bear, a character he played in a TV show we produced. Five-year-old kids loved Blackberry, and at the same time he threw in subtle jokes to keep the adults amused. (Watch a PSA Blackberry Bear did for the local hospital, or the Visitor Information Program, which Blackberry hosted.)

Arthur was even silly while we conducted business. For years we had a video business; we sold the nature videos we had filmed and produced at tourist shops around western North Carolina. When we visited our retailers Arthur would tell stories and jokes to the clerks or owners, always lightening up the transaction, or he’d go off and play with the store cat, all of whom he knew by name (while often not knowing the names of the people).

A friend called Arthur a “gentle giant.” He was a big man physically, but he also had an outsize personality. People always remembered Arthur. When we’d met someone casually sometime in the past, they would rarely remember me, but as soon as they saw Arthur they’d say, “Oh yes, now I know who you are!”

And he was gentle, kind, and tenderhearted. Arthur was very loving and fair. I don’t remember us ever having a conversation about sharing household duties. It seems as if this was just a given in our relationship from the first, that we would share equally. And it was a very natural division, I don’t remember ever negotiating about who would do what. Arthur cleaned bathrooms, vacuumed, dusted, washed windows, and did the dishes.

Arthur loved animals and was very tender with them. One of my favorite photographs of him is in Tahiti, posed in front of a line of stray cats feasting on the canned tuna Arthur had brought them. 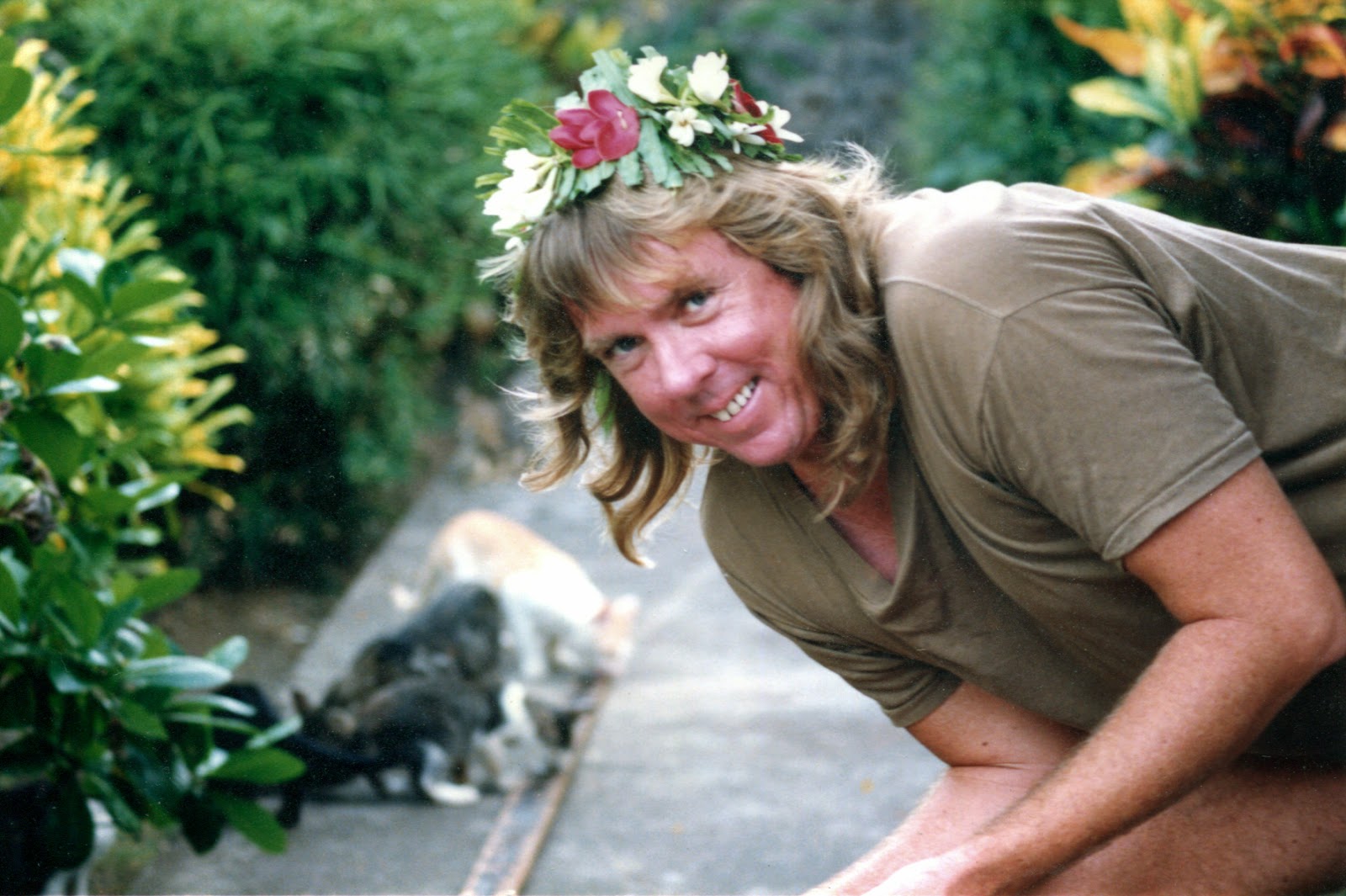 Arthur had an amazing mind. He was very intelligent, but had been born into a working-class Southern family and had no chance to go to college. So Arthur educated himself by reading literature and poetry. His memory was astonishing (as you might imagine given the fact that he knew hundreds of songs) and he could think of a passage from a book or film for every occasion.

Arthur loved literature and some of his favorite authors were William Faulkner, Erskine Caldwell, Vladimir Nabokov, and Evelyn Waugh. He was 18 when John F. Kennedy was assassinated, and the night of the assassination he stood under a streetlight and read Walt Whitman’s poem about Abraham Lincoln’s assassination, “When Lilacs Last in the Dooryard Bloom’d.”

He also loved astronomy. Arthur was at Cape Canaveral when the Apollo 11 crew took off for the moon in 1969, and we saw a few shuttle launches, including one on the base where we were so close we could feel the sound of the lift-off in our bodies. Arthur loved looking at Hubble telescope images, and was so conversant with the large numbers involved in cosmology that he could sing Monty Python’s “Universe Song,” filled with statistics about the size of the universe, completely from memory.

In his late 20s Arthur decided to see the Himalayas, and spent six months in Nepal. He had some amazing adventures there, including a two-week hike that took him within a few miles of Mt. Everest. 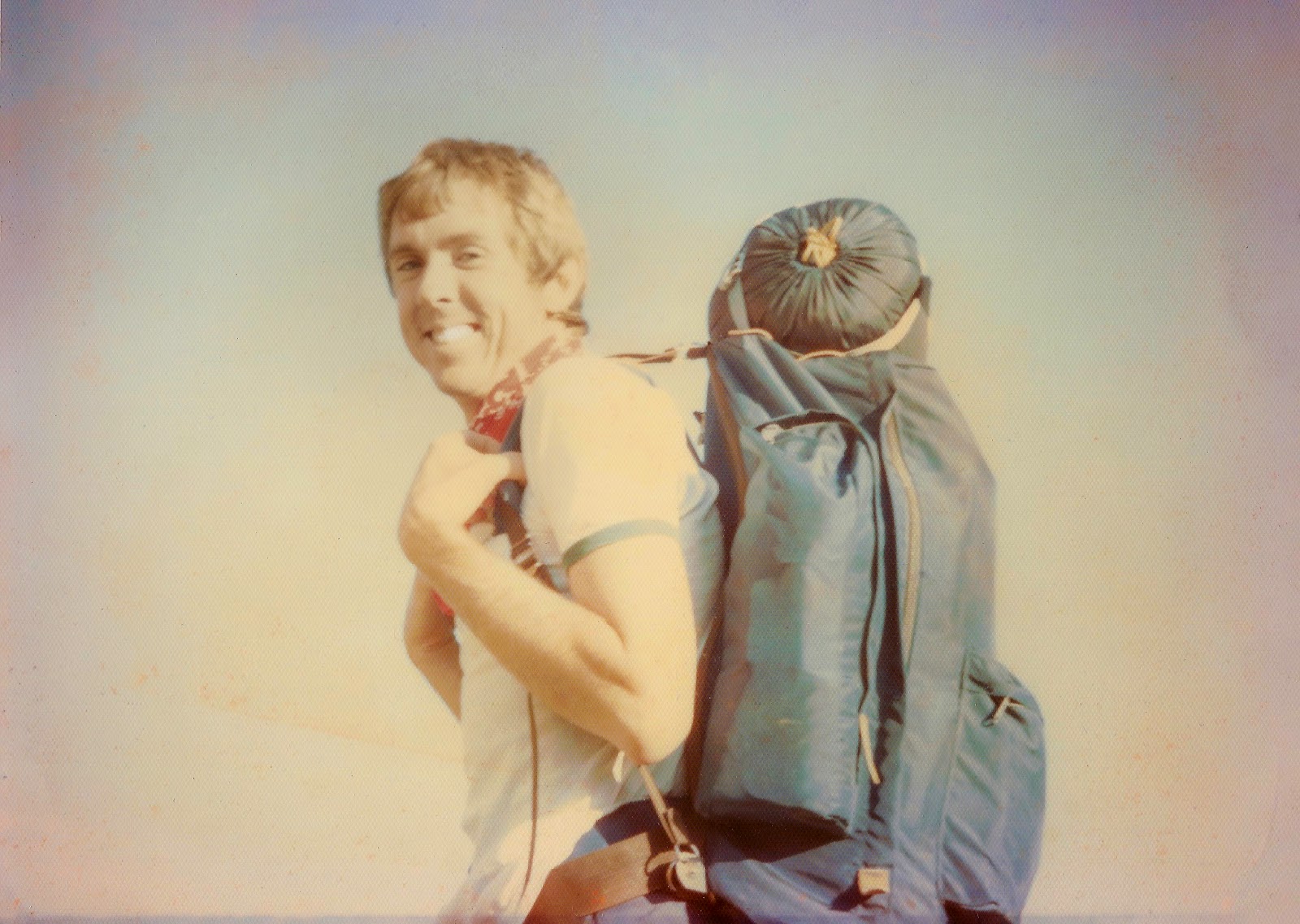 While there he contracted Guillan-Barre Syndrome and was paralyzed from the neck down for a year. He regained the ability to walk and play the guitar, but had physical limitations from that point on. Yet he never complained, and many casual acquaintances never knew there was anything wrong with him. Despite his disability, Arthur managed to accomplish much in his life.

Arthur took numerous risks and lived on the outside of our culture, never wanting to compromise just to make a living; he questioned himself and life carefully and deeply. As a result he had a very unusual perspective on life. And he wasn’t afraid to be outrageous.

Arthur spoke his mind; he wasn’t afraid to say what he thought. I really admired that about him.
Arthur had some extremely profound spiritual experiences on LSD when he was a young man, and these informed his life and his work.

One of the lessons he learned from his acid trips was a profound love of nature. This found expression in our nature videos. Arthur could find as much beauty in a ditch as in an awesome vista. On his first LSD trip he saw that a patch of dirt was the jewelry case of God, and that perception never left him.

Another legacy of his LSD trips was an unshakeable faith in a reality beyond the physical. He had such deeply profound experiences that he never doubted that there is a God, an absolute Truth, underlying life. The reality of this Truth, which is Love, informed his songs and his philosophy.

Our first book, The Game of God, is the fruit of his LSD visions. Arthur spent five years seriously and soberly developing the philosophy that forms the basis of that work and our next book, We Are ALL Innocent by Reason of Insanity. He developed a philosophy that was comprehensive: it covered theology, the mechanics of the physical universe, and psychology. The heart and essence of Arthur’s philosophy is love. To quote Whitman again, “No other theme but love.”

Arthur and I produced a TV show in 2010 for our local public access channel where we discussed our ideas. You can watch them here at our 'A Question of Meaning' YouTube channel (we did 45 shows in all). 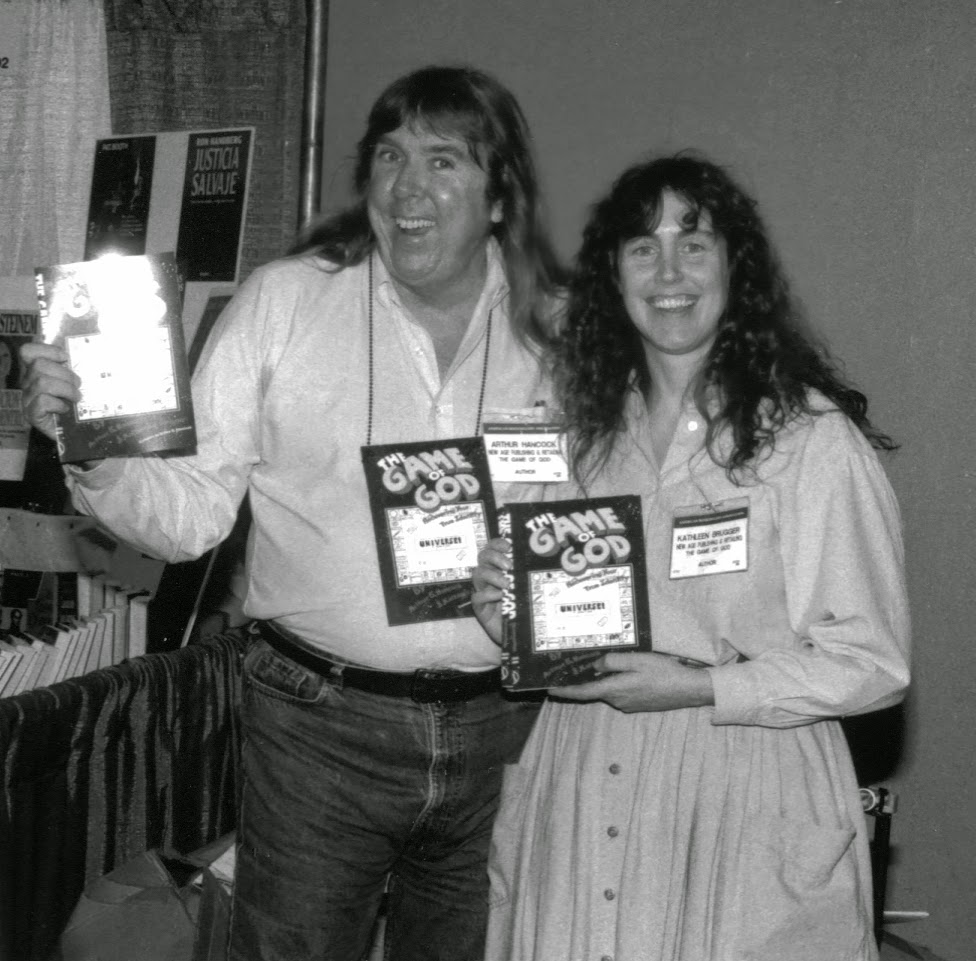 Arthur also wrote a memoir, Exposing Myself: A Life of Sex and Truth, in which he describes the adventures of his life and the development of his philosophy.

Arthur felt that most people hide their sex life when they write their memoirs; he felt that someone needed to be honest about this aspect of life and that he was the right man for the job. He dreamed of a day when people wouldn’t have to be ashamed about sex, and was an advocate for freeing our culture from our Puritan past.

One day not long after Arthur and I met in San Francisco we were walking through a park at sundown. The sky was banded with clouds, and the clear patches were turning a brilliant but soft green between the dark red and purple clouds. Arthur pointed and said, “That turquoise—there—that’s my idea of the color of paradise.” That color spoke of paradise to me also, and for all of our years together we would look for the color of paradise in the sunset. 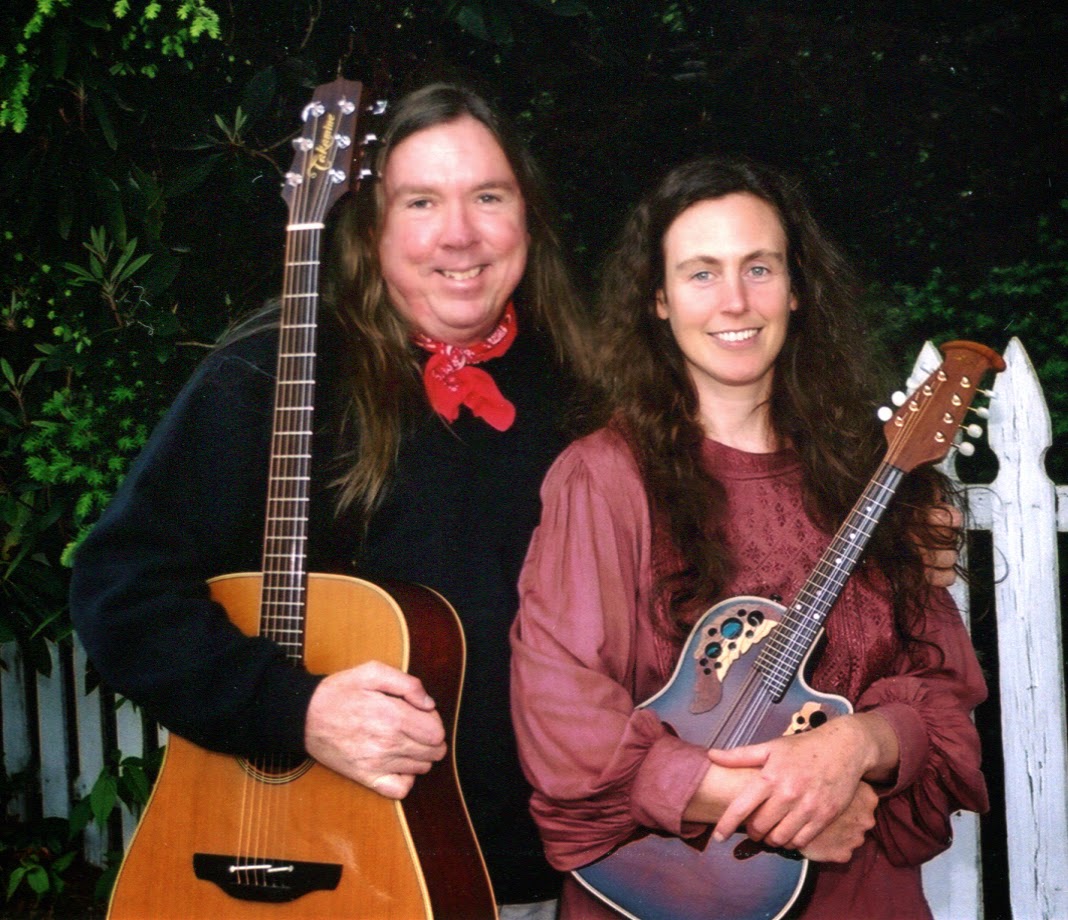 Arthur loved me intensely. I loved Arthur intensely. We were both incredibly blessed to love the one who loved us.

I will miss this extraordinary man for the rest of my life. 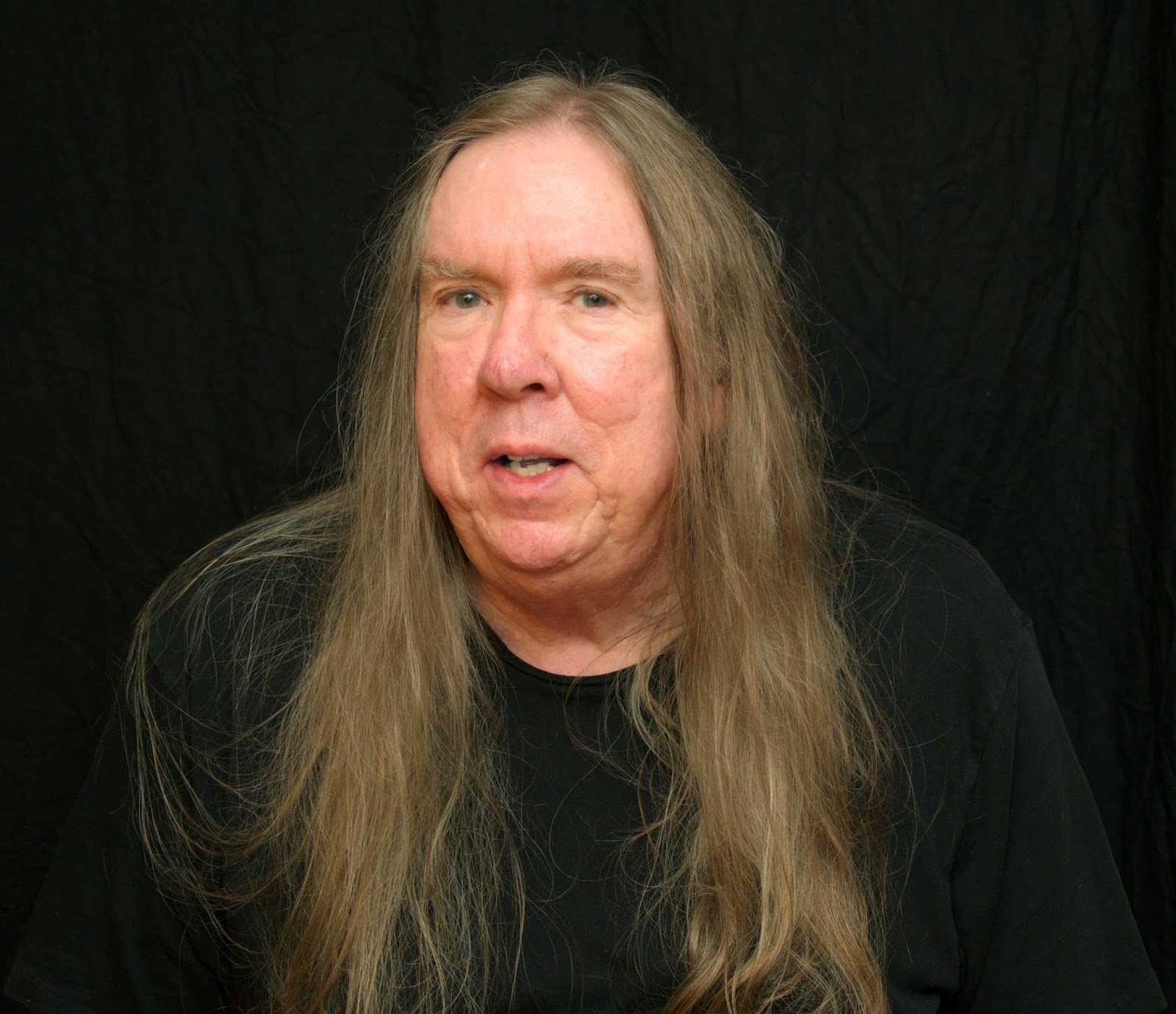