Better Never To Have Been Born? Really?

Ingmar Bergman’s 1957 film, Wild Strawberries, is a beautiful story of an old man realizing that, even though he was a brilliant doctor who selflessly served his patients, he was emotionally reserved. No one could get close.
The film takes place in one day, as the old man drives to the town where he is to receive an honorary degree. Through vivid dreams he is able to experience the cost of his coldness—the loss of his first love and the infidelity of his wife. His daughter-in-law accompanies him on the trip, and she reveals the cost in the life of his son. When she told his son that she was pregnant, he replied, “Life is absurd, so I don’t want to bring any children into this world. I want to die myself.” (Not an exact transcript)
Bergman ends the film with the promise that his characters will be healing from this life-negating worldview.
The film brought to mind “The Case Against Kids,” by Elizabeth Kolbert, a review of three books about the ethics of having children. I was astounded to read about Better Never To Have Been: The Harm of Coming into Existence, by a philosophy professor at the University of Cape Town, South Africa, named David Benatar, in which he claims that the inevitability of suffering means it’s better not to be born at all.
Kolbert quote from Benatar’s book:

One of the implications of my argument is that a life filled with good and containing only the most minute quantity of bad—a life of utter bliss adulterated only by the pain of a single pinprick—is worse than no life at all.

She paraphrases more of his argument thus:

If we all saw the harm we were doing by having children and put a stop to it, within a century or so the world’s population would drop to zero. For Benatar, this is an outcome devoutly to be wished. "Humans have the unfortunate distinction of being the most destructive and harmful species on earth," he writes. "The amount of suffering in the world could be radically reduced if there were no more" of us…Benatar’s title refers to the passage in Sophocles’ ‘Oedipus at Colonus’ in which the chorus observes: "Never to have been born is best, But once you’ve entered this world, Return as quickly as possible to the place you came from." It also alludes to an old Jewish saying: "Life is so terrible, it would have been better not to have been born. Who is so lucky? Not one in a hundred thousand."

It occurred to me that this is the inevitable consequence when a culture no longer believes in absolutes: since there is no meaning to our suffering, it’s better not to exist at all.
Read more »
Posted by Unknown at 10:33 AM 7 comments:

The Pursuit of Individual Excellence 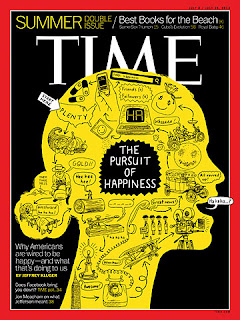 As an American, I have been programmed to think that “pursuit of happiness” is my birthright. But what exactly does that mean? What is happiness?
Time magazine did a cover story on happiness last month. One of the articles, “Free to be Happy,” asked the question, “What did Thomas Jefferson mean by ‘pursuit of happiness’ in the Declaration of Independence?”
I was surprised to read, “The idea of happiness…in Jefferson’s hands, may be better understood as the pursuit of individual excellence that shapes the life of a broader community.” Thomas Jefferson, I learned, was a fan of Greek philosophy, and “eudaimonia — the Greek word for happiness — evokes virtue, good conduct and generous citizenship.”
To me, this sounded like the self-actualization at the top of Abraham Maslow’s “Hierarchy of Needs.” It also reminded me of what Mihaly Czikszentmihalyi means by the experience of “flow.” I did a little online research to see if other people agreed that this was what Jefferson meant.
On George Mason University’s History Network site I found “The Surprising Origins and Meaning of the Pursuit of Happiness”:

In the Nicomachean Ethics, Aristotle wrote, “the happy man lives well and does well; for we have practically defined happiness as a sort of good life and good action.”  Happiness is not, he argued, equivalent to wealth, honor, or pleasure. It is an end in itself, not the means to an end.Properly understood, therefore, when John Locke and Thomas Jefferson wrote of “the pursuit of happiness,” they were invoking the Greek and Roman philosophical tradition in which happiness is bound up with the civic virtues of courage, moderation, and justice. Because they are civic virtues, not just personal attributes, they implicate the social aspect of eudaimonia. The pursuit of happiness, therefore, is not merely a matter of achieving individual pleasure. That is why Alexander Hamilton and other founders referred to “social happiness.”

Jefferson and his peers lived this ideal: many men of the 17th, 18th, and 19th centuries used the leisure time afforded them by their wealth to pursue science, natural history, philosophy, and/or politics (Benjamin Franklin, Charles Darwin, and many of the Founding Fathers are examples).
Another place I found that referred to the Greek meaning of happiness was in a review of a book by a positive psychologist named Martin Seligman. “Positive psychology” is a new discipline which, instead of studying mental illness, concentrates on helping people develop more fulfilling lives. Martin Seligman is a prominent researcher in this field, and one of his interests is what makes people happy.
From a review of his book, Authentic Happiness:

[Seligman] makes an interesting and significant distinction between pleasure and gratification. He draws on the work of Aristotle and of the notion of “eudemonia,” a concept akin to gratification. The state of happiness or gratification (eudemonia) is attainable only by activity consistent with noble purposes. In a nutshell, when we focus on causes outside ourselves that benefit humankind and utilize our unique signature strengths, we transcend to higher and higher planes of authentic happiness. The book includes a lucid discussion of the distinction between gratification (deep, meaningful, and a social virtue) and pleasure (shallow and temporary).

So the meaning of “happiness” in the Declaration of Independence means developing ourselves to our maximum capacity in order to contribute to society. Fascinating. But this information stands in stark contrast to the main essay in that issue of Time, “The Happiness of Pursuit.” One-third of the this article concerns money and its relation to our happiness. The author mentions some recent studies showing an increase in “subjective well-being” that correlates with higher income, and concludes, “Rich isn't just better; it’s much better.”
The statistics in the article are pretty dismal; we seem to be an increasingly unhappy people:

Since 1972, only about one-third of Americans have described themselves as “very happy,” according to surveys funded by the National Science Foundation. Just since 2004, the share of Americans who identify themselves as optimists has plummeted from 79% to 50%, according to a new Time poll. Meanwhile, more than 20% of us will suffer from a mood disorder at some point in our lifetimes and more than 30% from an anxiety disorder. By the time we're 18 years old, 11% of us have been diagnosed with depression.

Maybe the reason we’re so unhappy is because we profoundly misunderstand the meaning of happiness. Too many of us confuse it with money and material possessions.
Dr. Seligman proposes that happiness has three dimensions that can be cultivated:

1. “The pleasant life” is realized if we learn to savor and appreciate such basic pleasures as companionship, the natural environment and our bodily needs.
2. We can remain pleasantly stuck at this stage or we can go on to experience “the good life,” which is achieved by discovering our unique virtues and strengths and employing them creatively to enhance our lives.
3. The final stage is “the meaningful life,” in which we find a deep sense of fulfillment by mobilizing our unique strengths for a purpose much greater than ourselves.

Posted by Unknown at 2:12 PM No comments: