Winter is so often maligned. People say it’s ugly: they talk about the sadness of the leaves being gone and the obvious superior beauty of spring, summer, and fall. Of course, they might say, snow is beautiful but that’s about it. 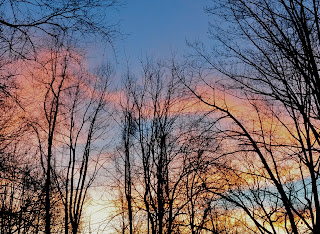 I love winter in a purely aesthetic way. As a child I can remember riding in the backseat of our car, looking out the window at a bare tree silhouetted against a winter dusk sky of pink and orange and deepest midnight blue and being moved by the beauty. That is still today one of the most beautiful things I know.

Just down the road from my house is a field that climbs a hill, ending in a row of trees along the top of a ridge. Looking at those trees silhouetted against the deepening night of a winter sky is one of the pleasures of my year here. I rarely notice those trees any other time of year—all the foliage blocks the clean geometric lines of the branches.

Who Knows What's Good or Bad?

Recently I watched James Cameron’s Titanic. One of the twists of the film’s story is that Jack, the protagonist, was not supposed to be on that ship. Just before the Titanic sailed he won two tickets in a poker game with two Swedes. When one of the Swedes realized that the other had bet and lost their tickets to America, he punched his friend out. This appeared to be a disaster for the Swedes, and a triumph for Jack and his Italian friend.
After boarding, Jack and his friend ran down the corridor of the great ship’s third-class compartment, and Jack shouted, “We’re the luckiest sons-of-bitches in the world!”
This makes me think of a Chinese parable: One day a farmer’s only horse disappeared. When his neighbor came to console him the farmer said, “Who knows what’s good or bad?” The next day the farmer’s horse returned accompanied by a wild horse, and the neighbor came to congratulate him on his good fortune. “Who knows what’s good or bad?” said the farmer. The next day the farmer’s son broke his leg trying to ride the new horse, and the neighbor came to console him again. “Who knows what’s good or bad?” said the farmer. When the army passed through, conscripting men for war, they passed over the farmer’s son because of his broken leg. When the man came to congratulate the farmer that his son would be spared, again the farmer asked, “Who knows what’s good or bad?”
In the movie, Jack and his friend ended up dying, and the Swedes were now the luckiest sons-of-bitches in the world. (There's a similar storyline in The Lord of the Rings trilogy: it appears to be really bad that Gollum survived until right at the end, when it turns out to be a very good thing.)
I thought of this Chinese parable while reading Damien Echols’ book, Life After Death. Mr. Echols served 18 years in prison for the infamous West Memphis murder of three young boys, although he was innocent of the crime.
Read more »
Posted by Unknown at 2:13 PM No comments:

Another mass shooting has occurred; this time at an elementary school in Newton, Connecticut. Twenty children—all six and seven years old—and six adult teachers and staff, dead. I didn’t watch the televised memorial services. Personally I don’t care for the media frenzy that follows these events; I find it unseemly, to put it mildly. But I did hear a little bit of a speech made by a minister, and he seemed to be struggling to express himself. I think his problem was that he was paralyzed by a basic problem of most theologies, what is known in philosophy as “theodicy”: how can you reconcile a loving God with human suffering?
I love this word, theodicy, because to me it sounds like the combination of “theology” and “idiocy”; many religious people come across as idiotic when they try to explain how God could allow something horrible to happen, like last week’s senseless slaughter of children.
Twenty years ago, my husband Arthur and I published a book called The Game of God. Theodicy is the starting point; the book’s introduction begins with this passage:
A friend recently told us that, of all the funerals he had ever attended, he had yet to hear a minister satisfactorily answer the question, “Why did God create death?” He went on to say that, in fact, he had yet to hear a minister (priest, rabbi, etc.) make any sense of why God had created anything at all. Our friend concluded that the most sensible explanation for this dangerous and mysterious universe is simply that there is no God.
We live on a tiny planet lost in a huge and seemingly indifferent universe. Life is a continuous struggle which inevitably ends with death. Life is a terminal disease.
What kind of universe is this anyway? Does life have any meaning or purpose? If there is a “God,” why did God create the universe?
Many religions have tried to explain God’s motives for creating the universe—a universe filled with suffering and death—but these theologies are often illogical and filled with contradictions, and thus fail to provide comfort when a true test arises: when real disaster strikes.
A minister once told us that, in his experience, the death of a child was particularly difficult to “explain,” and has often resulted in expressions of hatred for God by the parents, and even the abandonment of their faith.

Science has been a great boon to humankind. Anyone who has lived through a few days without power after a storm realizes how dependent we have become on the technological gifts of science. In 2004 I went 5 days without power after Hurricane Ivan hit western North Carolina; because I lived in the country this meant no running water either. My husband and I took the power crew out to lunch after they turned our power back on out of sheer gratitude for returning us to the 21st century.
But science has had some negative influences on our culture too. Scientists have made their work easier by imagining that life can be chopped up into little pieces and studied separately. They act as if this chopping up doesn’t have any effect on what they observe.
One of the consequences of this approach is the overemphasis of competition in the process of evolution: nature is composed of discrete individuals engaged in a brutal struggle for survival. The poet Alfred, Lord Tennyson described this view of nature as “red in tooth and claw.”
Some scientists are beginning to question this view of nature. They are putting the pieces back together to see the big picture: everything is interrelated, and cooperation balances competition in the mechanism of natural selection.
I’ve just read an astoundingly beautiful book, The Forest Unseen, by Dr. David George Haskell, which combines a poetic meditative sensibility with a scientist’s detail-oriented mind. Dr. Haskell is a professor of biology at the University of the South in eastern Tennessee. He found a patch of old-growth forest near his home, and within that forest designated a one-meter-square patch as his “mandala,” which he visited weekly throughout the course of a year. The book is composed of meditations on what he observed, and he finds inspiration in even the smallest things that most of us overlook.
I would recommend this book to anyone who loves nature; it is filled with both lovely descriptive writing and fascinating information about so many creatures, from nematodes to vultures. For many years I have walked in the woods without a goal; I would hike to a spot and sit and observe. Dr. Haskell’s book has inspired me to look even closer than before.

Am I Really a We?

I have a degree in molecular biology, and I can remember the day I told a decidedly non-scientific friend about the mite that lives in human eyebrows—I thought it was fascinating, but he found it not only disgusting but profoundly disturbing. Modern civilization has tried to banish all parasites and insects from our bodies and living spaces; we think we live in an antiseptic indoor refuge separate from the creeping, crawling outdoors.
A recent New Yorker had an article that would have disturbed my friend even more: “Germs Are Us,” by Michael Specter. What scientists are discovering is that our bodies are actually a “microbiome,” an ecosystem that includes not just the cells of our bodies but thousands of species of bacteria, viruses, and fungi (not to mention those mites). Mr. Specter writes,

We are inhabited by as many as ten thousand bacterial species; these cells outnumber those which we consider our own by ten to one, and weigh, all told, about three pounds—the same as our brain. Together, they are referred to as our microbiome—and they play such a crucial role in our lives that scientists have begun to reconsider what it means to be human.

There are ten trillion cells (more or less) in our bodies, so that means we contain 100 trillion bacteria, virus, and fungi cells. This raises the question: Who am I? Am I an individual or a community?
Read more »
Posted by Unknown at 7:08 AM No comments:

Is There Such a Thing As Race?

Think about race. What comes to mind? If you’re like most people, you think of White (Caucasian), Black (Negroid), and Asian (Mongoloid). Maybe with a little reflection you add Native American. (The terms in parentheses are the scientific names for these races.)
These categories basically conform to the racial categories I grew up with, which we crudely called white, black, yellow, and red.
Now ask yourself: What is the meaning of race? Does it mean there are significant differences between groups based on variations in physical characteristics? Does it mean differences in abilities as well?
Do you think one race is superior to others in athleticism? Do you point to the number of black football and basketball players, or the winners of the 100-yard dash at the Olympics?
Do you think that one race is superior in intelligence? Do you point to the results of IQ tests that show Caucasians and Asians with higher average IQs than those of Negroid extraction?
Let’s think of regions of the world. What race are Mexicans—are they white? What race are Egyptians—are they black? What race are Indians—are they Asian? What race are Australian aborigines? Think about Europe. Are the blond, blue-eyed, fair-skinned Norwegians the same race as the dark-haired, dark-eyed, dark-skinned Spaniards? How do you draw the lines that separate races? What is the basis for the categories?
Now let’s think of specific people. What race is the current president of the United States? Barack Obama is commonly called the “first black president.” But he is equally Negroid and Caucasian. He is just as much “white” as he is “black.” To label him as a member of just the one and not the other is absurd.