I became a fan of Sharon Draper when I read her book Out of My Mind earlier this year, but I didn’t know anything about her as a person (the copy of the book didn’t have an author photo).  Recently I wanted to refer to the book in a forum post and googled her to check a fact. I went first to an interview where someone asked why race hadn’t come up in the book. I thought that was an odd question, but it made me realize that race had never been mentioned. Then I clicked on another link and saw a photo of Ms. Draper and realized she is black. Then the question made sense.
But why should the book have to revolve around race just because she’s black? Ms. Draper was addressing an issue that confronts people of all races—the prejudice faced by a young girl with cerebral palsy—and giving the girl a racial identity would just have clouded that message.
Knowing this about her has made me even more of a fan. She is an example of the radical equality I dream of, where we don’t have to pay attention anymore to details like race, gender, or sexual orientation. Those things are immaterial; what matters is what kind of person you are.
American culture has made great strides in the last decade in recognizing the rights of LGBT people. But I dream of a day when no one has to “declare” their sexual orientation. In other words there is no “normal” sexuality that requires you to say “I’m not that, I’m this.”
Years ago SouthPark had an excellent episode about the end of racism. Chef, who is black, was angry about the town’s flag, which depicted a black man being lynched and white people dancing around the tree. The adults were confused about why Chef was angry—“this is our tradition,” they said—and the children were too…for a different reason. Chef realized that the kids didn’t see color—when one of them described the flag he said, “it’s a person hung from a tree and other people are standing around.” Chef realized his response had racism in it—it was all about color. The resolution was the flag basically stayed the same—a black person hanging from a tree and people all around—with one significant difference: the crowd is now multicolored and includes a black person.
One day we will all realize that everyone is radically equally human.

Update: my niece and I just read To Kill a Mockingbird, set in segregated Georgia in the 1930s. My niece thought that Calpurnia, the black cook/housekeeper, and Atticus were probably going to get married. By way of explanation she said, "The kids loved her!" I could see her struggling to understand as I explained why that marriage would have been unthinkable at the time. It was great seeing that the explanation made no sense to her.
Posted by Unknown at 2:20 PM No comments:

Potato Salad and the Future of Work 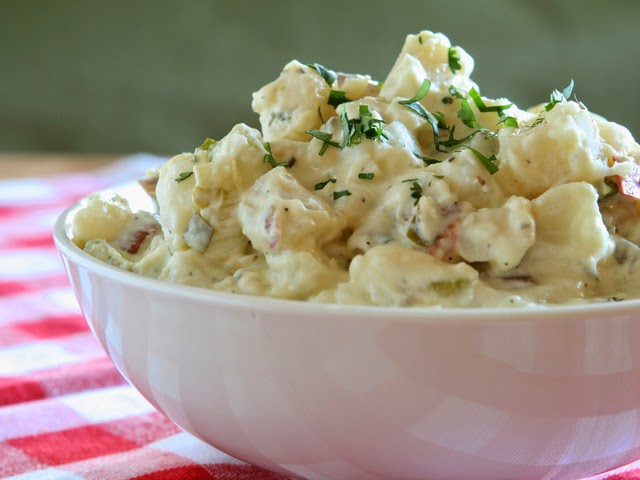 At the beginning of July a man posted a project on Kickstarter: Making Potato Salad. He asked for $10 for supplies, and since this was his first potato salad, he said it might not be any good, but he’d send samples to anyone who funded him for $3. This is what he’d do if you pledged $20:

Within a week he had over $40,000 pledged.
I first heard about this from uber-liberal cartoonist Ted Rall, who found it outrageous that such a frivolous “project” could generate so much in donations. His cartoon, “Potato Salad Society,” includes these comments:

Meanwhile, worthier Kickstarter projects—and charities—go unfunded. It’s safe to assume that few of the potato salad supporters would give anything to save refugees in South Sudan…Finding donors online requires the deadpan, mildly amusing tone that has become the official vibe of the Web.” Rall’s conclusion: “We.Are.Doomed (Internet-friendly neo-Bob Newhart tone).

First off that is quite condescending and presumptuous to assume these people wouldn’t give to refugees, but this is in-your-face Ted Rall; he loves being confrontational.
But more importantly, I think Rall and other critics are missing something important here. I think this potato salad project could signal the future of how many of us earn a living.
I envision a future where some people make their living online, with sponsors contributing small amounts a month or year to support their creative output —a crowdsourced version of the wealthy patronage system that supported great Renaissance artists like Michelangelo. Instead of depending on one wealthy person, these people could live off thousands or millions of tiny contributions.
It’s becoming common today to see paypal “donate” buttons on websites. Ted Rall has one on his website, and I have contributed as a way of showing my support for his work (perhaps he’s bitter because he’s not generated the same level of support as the potato salad maker).
We could support people because we think his or her work is important, or because we want to be part of it. We could show our appreciation for something that makes us laugh, or think, or cry, by contributing a small sum. The Huffington Post interviewed 18 of the potato salad donors, and they said they had contributed because they thought it was “funny,” “charming,” and “genuine.”
Through the wonder of the worldwide reach of the Internet, those small sums could potentially add up to a decent living.
There are predictions that we are not far from a revolution in work, due to the roboticization of the workplace. This will throw a large percentage of people out of work, and we’re not talking about factory workers only, this includes doctors and lawyers (see my blog post). If this is true we’re going to need to find entirely new ways to earn a living. Supporting each other’s creative endeavors seems to me a very positive solution.

Some years ago I was pondering Civil War battles and in particular what could possibly motivate men to make a charge knowing there was an almost 100 percent certainty that they would die. This saying came to my mind: “We consistently overestimate our level of consciousness, and we consistently underestimate our level of unconsciousness.” This was the only way I could make sense of it; there was something besides the rational conscious mind propelling those men to their doom.
Over the years this insight has seemed more and more powerful to me. I think it can be applied in a general fashion. Most of us think we have a lot more control over our thoughts and actions than we really do. In fact, this is where the belief in free will comes from; we think we consciously choose our thoughts and actions.
Of course it’s easy to understand why we would have this bias. We are only aware of what is in our conscious mind, so we think that’s where all the action is. However, neuroscientists are now establishing the power of our unconscious mind and the limitations of consciousness. This may sound like a bad thing at first, but when you begin to understand how it works, you can learn how to harness the unconscious mind to your advantage.
Read more »
Posted by Unknown at 2:04 PM No comments: