Next Front in the Equality Wars

I predict that the next front in the struggle for equality will be prejudice based on physical features: attractiveness, height, and weight.
I have never worn makeup, and I have often mocked women who do. In my mind, makeup created an artificial face, and I have been a devotee of the natural. “Why can’t women be like men,” I thought, “and live with the face they were given?”
Recently the New York Times had a forum about the use of makeup, “Does Makeup Hurt Self-Esteem,” with brief essays on both sides of the issue. One was by Nancy Etcoff, an assistant clinical professor at Harvard Medical School and a research psychologist at Massachusetts General Hospital. She has done research into the perception of women’s faces with and without makeup.
Her experiments showed that when a viewer first saw a face with makeup, the initial reaction was positive, but upon longer reflection, the more dramatic the makeup the less trustworthy the person was judged to be.

We asked people to rate photographs of women with and without makeup. Seen very quickly (250 milliseconds), women wearing makeup looked more attractive, likeable, competent and trustworthy to our viewers than those who went without it. On longer inspection, responses became varied and nuanced. Faces with natural makeup were seen favorably but faces with more dramatic makeup were seen as less trustworthy.

This seemed to validate my prejudice against makeup, but then I read her journal article online and changed my mind. Ms Etcoff and her associates cite four different studies showing a strong prejudice against unattractive people in the workplace. Men and women who are judged to be unattractive have a harder time getting hired, earn lower salaries, and are judged to be less intelligent and competent.
Read more »
Posted by Unknown at 7:19 AM 1 comment:

Of Cannibals, Kings, and Collective Realities

I am a big fan of the television show “Mystery Science Theater 3000” (MST3K), in which the characters watch bad movies and crack jokes. Sometimes the show included short educational films that were shown in schools fifty years ago, with subjects like “body care and grooming,” or “why study industrial arts?”
These films taught children our culture’s basic assumptions. One of my favorites, “A Date With Your Family,” is a classic example. It taught that children should be well-mannered and polite; a woman’s role is to be charming to the men of the family; daughters help with dinner while sons play and do homework; etc.
This film is hilarious (particularly with the MST3K jokes) because, with all the changes that have happened in our society over the last sixty years, the assumptions of 1950’s American culture are obvious.
However, some of the assumptions on display in the film are still taken for granted, and because they are part of our cultural reality they are hard to see. One that jumps out at me is the belief that “family = two parents and children.”
Recently I read an interesting article about cultural assumptions with the wonderful title, “Of Cannibals, Kings, and Culture,” (how can you not click on that headline?!), by Adam Etinson. In 1593 the essayist Michel de Montaigne encountered three Brazilian cannibals at the court of the French king. Montaigne also interviewed some of the sailors who had been in Brazil, and his subsequent essay, “Of Cannibals,” gives a fascinating account of Brazilian society, including their polygamous relationships. Of most interest to Montaigne is that the women liked this arrangement:
And it is one very remarkable feature in their marriages, that the same jealousy our wives have to hinder and divert us from the friendship and familiarity of other women, those employ to promote their husbands' desires, and to procure them many spouses; for being above all things solicitous of their husbands' honor, 'tis their chiefest care to seek out, and to bring in the most companions they can, forasmuch as it is a testimony of the husband's virtue. Most of our ladies will cry out, that 'tis monstrous; whereas in truth, it is not so; but a truly matrimonial virtue, and of the highest form.
Montaigne then cites the Bible as evidence of the virtue of this type of marriage: Jacob not only had two wives but they both “gave the most beautiful of their handmaids to their husbands.”
Read more »
Posted by Unknown at 6:59 AM 1 comment:

Liberals: Exactly What Are We Celebrating?

Liberals have been excited ever since the November 2012 election; they seem convinced that Republicans are destroying their own party. The evening shows on MSNBC are filled with ridicule of the latest conservative’s statement and celebrations of the imminent demise of the Republican Party.
In my opinion this celebration is misguided.
I believe liberals would be much better off spending their time explaining why the country would do better with liberal policies than conservative ones. It’s so much easier to trash the Republicans—and it has more entertainment value.
But just because the Republicans have lost some elections, and are having trouble finding new voters, doesn’t mean the party is going to disintegrate. As many people have pointed out, the Democratic Party went through a similar experience in the 1970s and that party is still here.
Perhaps the main reason I believe liberals need to focus on communicating their message is because conservatives have been winning the national political debate for decades now. After the 2012 election David Frum wrote that conservatives shouldn’t despair, because “Whatever you think of the Obama record, it's worth keeping in mind that by any measure, free enterprise has been winning the game for a long, long time to this point.”
Read more »
Posted by Unknown at 6:46 AM No comments:

Maybe the ADHD Problem is Something Else

Many years ago I taught art in a private elementary school. One of the boys in the second grade was diagnosed as hyperactive; this was long ago when this condition was still relatively rare. I loved this boy—he was intelligent and creative. Luckily for him at this time he had a very wise teacher.
She allowed him to sit on the floor and play with blocks during class while the rest of the students sat at their desks. She told me that, even though he wasn’t “paying attention” to the lesson, whenever she asked him a question he was completely aware of what was being taught. She realized that he could focus his attention better when his hands and body were engaged in activity. If she had tried to make him sit still he would have had much more trouble following the lesson. What was so remarkable to me was not only her understanding of this boy’s needs, but her ability to explain to the other children why they had to stay in their seats. I never heard any grumbling about unfairness.
A few days ago the New York Times reported, “Nearly one in five high school age boys in the United States and 11 percent of school-age children over all have received a medical diagnosis of attention deficit hyperactivity disorder, according to new data from the federal Centers for Disease Control and Prevention.” If that’s not bad enough, the American Psychiatric Association is just about to change its definition of the disorder, which, the Times article says, will result in even more children being diagnosed.
Every day I read the blog of Tom Toles, the Washington Post cartoonist. In a post this week he casually mentioned that, since he hated sitting for long periods in meetings, perhaps he had ADHD. “Meetings are a little like School, which was never a friend of mine. I am a born fidgeter, and about 30 minutes in a chair is about maximum for me. Yes ADD or ADHD or Addlle-Dee-Dee or what have you. I get bored and restless.”
This made me think: maybe the problem isn’t the kids—maybe our modern system of work and school is unnatural for humans. Instead of medicating our children perhaps we should be examining our culture. We’re rewarding quiet, submissive children who can sit still for long periods of time and punishing lively, energetic children. Is this really wise? Or does it make for docile workers?
The NY Times article quotes Dr. Jerome Groopman, a professor of medicine at Harvard Medical School and the author of How Doctors Think: “There’s a tremendous push where if the kid’s behavior is thought to be quote-unquote abnormal — if they’re not sitting quietly at their desk — that’s pathological, instead of just childhood.”
Of course there are some troubled youth whose lives have been transformed for the better by ADHD medication. What is at issue here is the labeling of twenty percent of our teen-age boys as diseased.
Time magazine also reported on the CDC data. Studies have shown that behavioral therapy can be very effective in treating ADHD, and this means changing more than just the child’s behavior: “Playing and engaging more directly with children on a regular basis, for example, tends to calm them down, and setting limits and educating children about the consequences of their actions can also help.”
How many of the problems that children have today can be traced to the pressures and stresses on modern parents? When both parents work, and their jobs require constant connection via cell phone and email, children are going to suffer.
Of course, writing a prescription is far easier than reassessing our behavior—that of individual parents and that of society as a whole.

Posted by Unknown at 8:45 AM No comments: 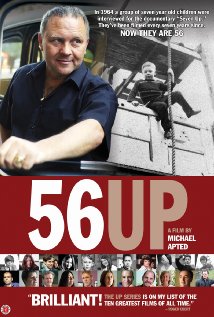 In 1963 a British production company created a television special entitled, “Seven Up!” Starting from the Jesuit saying, “Give me a child until 7 and I’ll give you the man,” the filmmakers gathered children from a wide socioeconomic swath in order to get a view of Britain’s future.
Luckily for all of us, one of the members of the original production team, Michael Apted, had the inspiration to return to these same people every seven years. What an incredible way to test the veracity of the Jesuits’ aphorism!
The latest film in the series, “56 Up,” was released last year. I have seen all of the films in the series; they fascinate me because it seems to me the adage is largely proven true. The child is still there in the adult; the essence of the person doesn’t change.
“56 Up” is beautifully edited. Each of the thirteen participants is taken in turn, and footage from the earlier films is edited in with the latest interview to give an overview of each person’s life. If you haven’t seen any of the other films, don’t worry; this film is so well done it can stand alone.
After viewing “56 Up” my main feeling is gratitude towards the people who were willing to participate over all these years. Some talked of the difficulties they had encountered as a result of being in the films, and it was clearly a sacrifice—your mistakes, your weaknesses, your marital troubles, your job loss, all chronicled for the whole world to see. This might not seem so noteworthy in the era of Facebook and Youtube, but in the years before the turn of the century this was very public living.
Read more »
Posted by Unknown at 4:52 PM 1 comment: